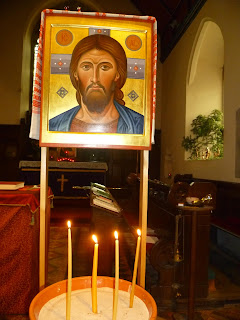 Whilst it is very common for Christian places of worship to have a space where an altar/table stands, the manner in which that space is marked off (if it is marked off) varies, e.g. a low wall, or a rail, or a screen may be in place.

Our parish’s two principal ikons - one of Christ, and one of his Mother (her official title in Greek, ‘Theotokos’, means ‘the Birth-giver of God’), who is holding the infant Christ - have been painted in order to stand on either side of the central entrance into the space where the altar/table stands.

Christians believe that our approach to God is through Christ: but Christ did not suddenly appear from nowhere, and the stories to do with his Mother, Mary (and also his extended family e.g. John the Baptist) have always been considered as important for understanding both who he is and what he is about. 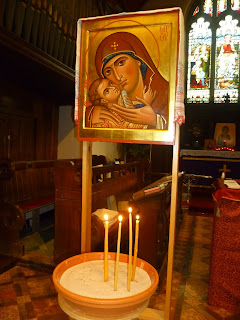 Our two principal ikons are painted in a way that symbolizes this way of understanding who Christ is, e.g. the colour of Christ’s shirt is the same colour as his Mother’s veil, and this references both that he has taken flesh in the womb of his mother, and that she is clothed with his innermost nature, which is divine.

We believe that Christ’s Mother was the first to experience the renewal of nature that begins with the conception of Jesus in her womb.

The infant Jesus is depicted as close to his Mother, and reaching out to embrace her; but he is also holding a scroll as a sign that he is both the fulfilment of the words spoken to her by the angel (Lk 1, 28-37) and that he embodies everything that the Prophets have heard of the Word of the Lord concerning Christ.  Mary is shown guiding our eyes towards her infant son, with her left hand: to all who seek an approach to God, she offers her son.

The Icon of the Nativity 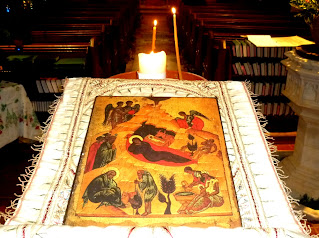 When Father Sergei Hackel took up his teaching post at the University of Sussex in the1960’s, a small group of émigrés, converts, and other Orthodox Christians, gathered around him for the celebration of the occasional service. Archpriest Alexander Fostiropoulos was one of those early members (he was then a layman) together with his wife Patricia, and their friends Andy and Mary Sherwood. In the 1960’s, in the time of Khruschev, the Orthodox Church in Russia passed through yet another wave of persecution; but the Diocese of Sourozh, in Great Britain, kept free of this and was in the process of developing statutes (based on the proposals of the Russian Sobor (1917-18) that would form the basis for its own self-government.
Father Sergei, Archbishop Anthony (Bloom) and many of the clergy and people of the diocese (particularly those of the 2nd or 3rd generation from émigré families) knew the ways that the Russian State used to control all religious associations: the policy was aimed at the elimination of all religious groups, under the pseudo-Marxist pretext that religion would gradually disappear in the historical process of forming the New Society.
It was during this period of renewed persecution in Russia (at the direct instigation of Khruschev) that the visit of HH Alexis I (the Patriarch of Moscow at the time) to the Diocese of Sourozh took place; and it was a conversation between the Patriarch and Father Sergei that gave rise to the naming of this parish (the then loosely constituted group had yet to be recognized as such) after the Nativity of Christ. Father Sergei told Patriarch Alexis that he was celebrating services at his house in Barcombe Mills (near Lewes) in what had once been stables, and Alexis said: ‘Well, Father, you must name the parish after the Nativity of Christ, and then many people will come on its Feast of Title.’


The Icon of St Maria 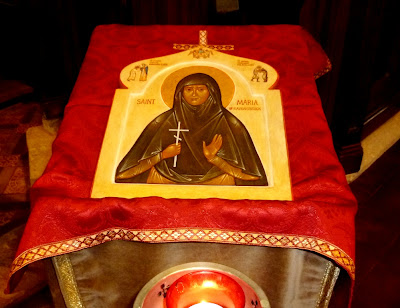 Father Sergei Hackel’s biography of Mother Maria (Skobtsova) was first published in 1965 (Darton, Longman & Todd Ltd, London) under the title ‘One, of Great Price’, and it was subsequently re-published under the title ‘Pearl of Great Price’ (1981, St Vladimir’s Seminary Press, New York). She was murdered by the Nazis at Ravensbruck concentration camp on the 31st March 1945, which happened to be Holy Saturday, by the Roman calendar.
Researching Mother Maria’s life had left Father Sergei in no doubt as to the enduring quality of her witness to Christ. He had written the biography because he believed that many people would benefit (as he himself had) from a study of her life; and the book contributed in no small way to a widespread recognition of both Mother Maria, and the tradition that had inspired her.
Towards the end of his life (Father Sergei died in 2005) he had an opportunity to speak to His All-Holiness Bartholomew (the Ecumenical Patriarch) about Mother Maria, and the importance of her witness. Father Sergei raised the question whether the time had come to glorify Mother Maria as a saint, and to his delight the Patriarch replied: ‘Yes, why not?’ Our Holy Mother Maria was first glorified as a saint in 2004, at services in the cathedral at Rue Daru, Paris: Father Sergei was amongst the many clergy and laity in attendance.
Our parish is named after the Nativity of Christ, but through the labours (and at the express wish) of Father Sergei, our Holy Mother Maria has become our patron saint, to inspire and guide us. We feel connected to her in a number of ways, not only through Father Sergei’s work, but also because she was personally known to both Archbishop Anthony (Bloom) and Hieromonk Lev Gillet, who were both (in their separate ways) influential to the Orthodox-Catholic mission in Great Britain.
Father Dimitry Klepinin was one of Mother Maria’s companions in Paris, and was also arrested by the Nazis, because he worked with her (and a number of other companions - one of whom was her son, Yura) in helping Jews to escape from occupied France. During one of his interrogations by the Gestapo, Father Dimitri took his pectoral cross and pointed to the figure on it with the words: ‘And do you know this Jew?’
Father Sergei was acutely conscious of anti-Semitism both in Russian culture (he was frankly critical of the writer Fyodor Dostoyevsky, for example) and contemporary church life (he had no hesitation in identifying anti-Semitism where it occurred amongst the hierarchy of the Orthodox Church in Russia) and he would edit liturgical texts to avoid using anti-Semitic material. He was a member of The Council of Christians and Jews (CCJ) which has been working since 1942 to combat anti-Semitism and promote Jewish/Christian dialogue.
(As told by Father Ian, 2012) 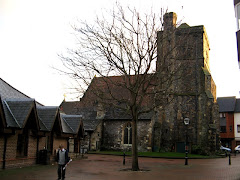 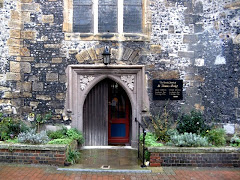 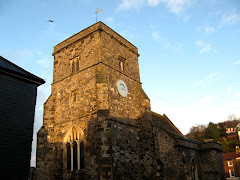 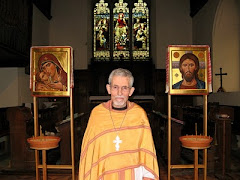